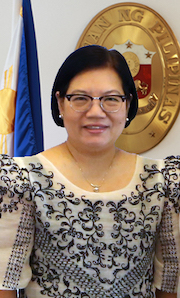 Ambassador Ma. Hellen B. De La Vega is a career officer of the Philippine Department of Foreign Affairs.

In the Home Office, she served in various capacities, including as the Executive Director of the Office of Asia and Pacific (ASPAC) from August 2007 to September 2008; Senior Special Assistant to the Undersecretary for Policy from March 2014 to November 2015. During this period, she also served as the Philippine Representative to the ASEAN High Level Task Force that drafted the ASEAN Vision 2025. Prior to her arrival in Australia, she served as the Assistant Secretary in the Office of ASEAN Affairs and the Director General of the ASEAN-Philippines National Secretariat from December 2015 to 04 September 2018. Part of her responsibility during this term is to organize and shepherd the substantive preparations for the Philippine hosting and Chairmanship of ASEAN in 2017 and ASEAN’s 50th Anniversary commemorative activities.

In the Foreign Service, her overseas postings include the following:

Go back to embassy page